Much of our strategy in terms of risk management has increasingly been associated with our viewpoints on interest rates and fixed income. Rather than discuss particular trades, I thought that it would be most helpful to provide some commentary in terms of our viewpoints in this area.

Many investors own bonds as part of their overall portfolio. Bonds are often thought of as the safety portion or “anchor” to an investment portfolio. However, bonds overall are in a precarious situation as rates have remained quite low. Bonds and interest rates have an inverse relationship. Now that our Federal Reserve has increasingly been talking about when to raise rates, this issue is becoming much more prominent. 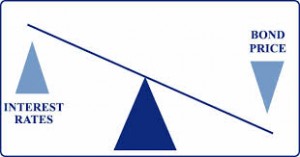 Low interest rates has created an asymmetrical risk situation, making bonds (overall) a particularly bad bet at the moment. That is because interest rates have a lot of room to increase over time, whereas there is not much room for rates to decrease. For every one percent move up in interest rates treasuries can lose as much as -8.5% (for the ten year treasury bond) and  -17% or more (for the 30 year bond).

Because bonds are an important piece of an overall asset allocation, we have identified some strategies that can help in reducing the interest rate risk associated with fixed income.